Perhaps Chalmers should consider the scientists?

Pardon my writing to you in English, because my Swedish has just about disappeared since I lived in Stockholm in the early 1950s as a small boy.

I see that you are studying why many people refuse to accept the claimed “consensus” on Global Warming.  From your brief summary here at your Centre for Studies of Climate Change Denialism, you appear to miss the most important point of all.  Scientists who have studied this subject extensively and have no conflicts of interests, such as a job dependent on the paradigm, disagree with the scientific conclusions of those who are heavily conflicted. 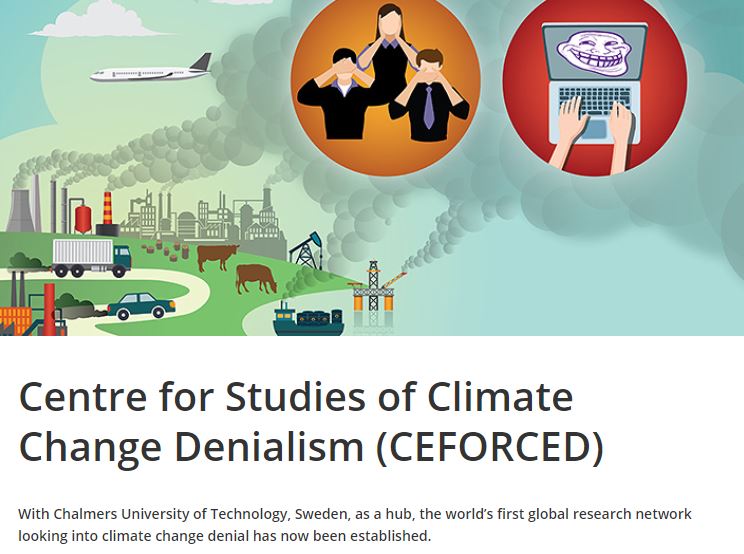 We do so based on the science.  In other words, we feel that the long logic chain beginning with human emissions of carbon dioxide and ending with a climate catastrophe do not stand up to even elementary scrutiny.  The paradigm says that human emissions lead to increased atmospheric carbon dioxide, and indeed, atmospheric CO2 is rising. But the assumption that the increase comes from human CO2 is unlikely, because Mother Nature is the big player in the carbon cycle.  According to both the UN IPCC and my fellow skeptics, Mother Nature pours 200 GtC (Gigatons of carbon) into the atmosphere every year and humans augment that with about 9 GtC. That makes the human concentration about 5%, which is far from concerning. Increasing atmospheric CO2 has led to a greening of the Earth, as seen from space.  That is good not bad. However, we cannot take credit for it, because we are only 5% of the effect.

Then there is the question of warming from so-called “Greenhouse gases” where water vapor is the completely dominant such gas.  That may not be totally apparent to someone living in Sweden, but it certainly is to those of us who have lived in the tropics. And most importantly, it is apparent to scientists who support the paradigm.  They know that the theoretical warming from a doubling of atmospheric CO2 is about one degree C in the absence of feedbacks. They get the additional warming they expect from a positive feedback from water vapor (another one or two degrees C) – especially in the tropics.  That in turn leads them to predict substantial warming in the tropical mid-troposphere, leading to the so-called “Hot Spot.” Such predictions are exactly what we need to verify the theory.

Unfortunately for the theory, there is no “Hot Spot” developing.  Both satellite and radiosonde data very clearly show the lack of a “Hot Spot.”  In the words of Nobel Laureate Richard Feynman, that means your theory is “dead.”  It does not matter how many supporters you have or who they are. The theory is dead.

So, where has the recent warming come from?  A look at the NASA UAH satellite temperature data shows impressive ocean effects like El Ninos, but only a tiny overall upward trend.  That could be CO2 warming, but not of the magnitude claimed by the paradigm. Or it could just be another ocean or perhaps solar effect.  We do not know for sure.

But we do know for sure that Warm Periods like the present one have occurred many times in the past over this Holocene Interglacial.  Previous Warm Periods go by names like Medieval, Roman, and Minoan, emphasizing the civilizations that they assisted. They clearly had nothing to do with humans burning fossil fuels.  Hence, there is nothing unusual going on today.

I realize that you are a sociologist and not a scientist.  So the imperatives of the science likely slip past you.

But there are still some of us who are highly qualified scientists (without conflicts of interest) and firmly believe in an objective reality that we work hard to discover.  I’m surprised that you completely ignore the objective component of the climate discussion. It is all that really counts in the end.