Global Green Airbag versus Global Greenhouse
Basic Science of a Changing Climate – the topic of the Conference that took place at Porto University in Porto, Portugal on Sept. 07. – 09. 2018. Attended by leading scientists in many domains, experts of engineering and critical thinkers of meteorology, oceanography, mathematics, geophysics, geology, chemistry and geography they confronted a very competent audience of about 80 people all over the globe from New Zealand, Australia, Canada, US, GB, Norway, Sweden, France, Germany, Italy, Czech Republic, Portugal. The primary focus of the conference was on basic climate science, nevertheless along the proceeding of the topics questions of communication to the public audience arose.

Opened by the Rector of Porto University there was a broad consensus that freedom of research is the absolute necessary basis for the progress of science. The speeches and discussions concentrated on four aspects: 1. Changes in Climate and Weather 2. CO2, Climate Sensitivity and Greenhouse Effects 3. Forcing Functions in Climate Change 4. Observational Facts, Interpretations and Geoethics. Nils Alex Mörner, former head of Paleophysics & Geodynamics at Stockholm University moderated the course of the conference that was hosted by the Faculty of Letters and represented by Maria Assunçao Araùjo of the Department of Geography and member of the Portuguese Sea Level Project together with Pamela Mattlock-Klein. Eventually some demonstrators turned up to protest against this conference without even trying to talk to the audience.

Drivers and fare dodgers
Unanimously all the assembled scientist put the human-emitted CO2 on the back seat of the climate-mobile. NO one supported in any way the “hysteria” in media and politics to reduce this assumed “threat” propelled by IPCC political papers and lobbies behind dominant media releases. Considering the quantity of water vapor in atmosphere which is the most dominant “greenhouse” player on earth with about 20% of the present gases, CO2 – representing roughly only 7% – is 94% of natural origin and only 6% out of anthropogenic (Veyre) – “anthropo(n)” meaning “human” and “genic” meaning origin. Consumption of fossil energy and other consumptions contribute only 18 ppm (parts per million) of 410 ppm of all CO2 in the atmosphere (from sea level up to 24000 feet) or 1 out of 2500 particles of the atmosphere! The main driver of atmospheric gases is water vapor, and CO2 of human consumption is negligible, thus the consensus (Gervais, Harde). Same observations and conclusions for the already passed so-called “greenhouse gases” like ozone and FCKW.

Global Green Airbag
Compared to Venus and Saturn the Earth luckily developed a so-to-say “airbag” or “Global green belt” as security features for our life. Water vapor and CO2 have minimum three very beneficial properties: they protect the earth from cooling – otherwise temperatures on earth would drop to a unlivable around minus 20 degrees Celsius. They act as a thermal cushion. Second, they protect our life and that of the plants and animals from solar and cosmic over-radiation like polaroid sunglasses. Third, they assure proper growing of all the green plant life on earth. Without CO2 no photosynthesis, no growth of plants below 150 ppm (Veyre, Gervais, Harde)! Global greening progressed thanks to CO2 – more growing of veggies and fruit and cereals and algae for an ever-growing population on earth that will soon arrive at 10 billion people. Without this Global Green Belt there will soon be more hunger and more starving instead.

Thanks to the Oceans
Oceans not only define the face of the earth from outer space as “blue planet”, as all astronauts observe full of emotions. Oceans are the heat tank with an enormous capacity – 2,7m water below surface contains the same energy as the air column of 8000m over it. Oceans produce 50% of the oxygen by the algae they contain, as an ad in the streets of Porto tells. And Oceans absorb 70% of the CO2 and stock it, transport it into the deep blue and there it is transformed into Calciumcarbonate and other carbonates and sinks to the ground as sediments. CO2 is also stocked in the waters as gas. Oceans contain 50 times the quantity of all naturally and in minor quantity humanly emitted CO2. Their role is still very much underestimated as there are only few measuring points and the quantity of them is tiniest compared to the surface of the oceans. Deep cold water-currents move slowly from the north to the south pole. This thermo-haline (“thermo” means “dependent on temperature, “haline” from “hals (gr.)” for salt (concentration) circulation takes about 140 years (!) and is one of the major drivers of climate besides water vapor and the sun (Mörner, Corbyn). The Ocean blues goes on – slowly and surely as its musical sister.

Moon, Sun and Stars
Everybody knows the tides controlled by the moon. At least also all main-landers that passed vacations at the coast of the ocean. Water level changes by influence of the gravity of the mass of the moon, more precisely said. But in space there is also the sun and the planets and their moons and the far-away stars. Mass effects add to another like the more people are in a bus the longer the distance to accelerate or to slow it down. Like this also the planets: if they are all in a line this makes the earth bump and slow or accelerate. (Tattersall, Zeller) Same the sun: the more energy it sends by magnetic and light radiation, and energy is mass by speed to the square as Einstein told us the more the rotation of the earth speeds up. And like in a merry-go-round the seats fly higher and more distant to the center with more speed – water rises at the equator the faster the planet turns. Follows the effect that as the amount of water is fix in the oceans the sea level is rising in the equatorial zone and decreasing in the higher latitudes. And the same when solar activity is low then sea levels rise in northern and southern high latitudes near the poles and water level decreases in a medium range of time in the equatorial zone. (Wysmuller, Mörner, Corbyn, Assunçao) Sea-level change comes and goes like the tide.

Suntan desperately needed
Like anybody is getting cold at night when sun is down and sky is clear – the same the earth. Without the sun radiation earth would freeze down to the temperature of Mars, nobody would like to live there. As the earth is a net-receiver it depends on the sun as net-donor. When sun gives much, earth is getting warmer than usual – a warm period, when sun is avaricious, earth temperature goes down and we can do ice-scating on rivers and lakes like in the 15th century in London, Amsterdam and Rome! This was the last little ice age. (Solheim, Yndestadt, Scafetta). The sun radiation is the prior clock of the climate, the highs and lows of the radiation – observed also by the number and length of the sunspot-number per period) makes the difference of our terrestrial sages. The sun activity is the main direct climate driver – the Mayas and Incas knew well!

Complexity, Chaos and Climate
In 16th century people burnt witches as a drought devastated Europe and emptied wells and Lakes like the Lake of Constance -as reported from Wittenberg 1540 where Martin Luther probably assisted. People do not like weather chaos, climate chaos, they want it orderly and cyclically like everything else. And if it comes worse, they want to “do” something instead of waiting for heaven or hell. Either someone has to “pay” or “confess” or “burn”. And people like it simple and hate complicated matters, in politics as in a lot of other dimensions like education, alimentation, relationships, work and fun. Nobody likes fatality today without a chance to turn it around, be it cancer or Parkinson. (Rieth) This is the time for “healers” and “quacks” and gurus. Climate is a complex affair – like a love affair sometimes – and we like it simple. We seek simple recipes for tricky matters. Who falls in love for maths and quants? And nonetheless this is the only way to tell the real story (Essex, Gervais, Rittaud, Monckton). Simple suggestions like take this and avoid this – like methane and CO2, avoid to eat meat and go vegan(so opposed to by Glatzle), stop inhaling, pay compensation for flying to Bali, confess your energy consumption, … is like a part of the simple messages of some guru-trip with the buddy driving a Rolls and people worshipping like mad for “his Highness”.
Porto Conference was about that – finding a sober and evidence-based message for a complex climate issue. Honest scientific research meeting blunt degradation in a time where middle-age thought-climate seems to regain power on enlightenment driven research. Gut versus head, fear versus sovereignty, panic versus coolness. The message of the second Porto Climate Conference – after the Obama decorated in June – is: Keep cool, no fear. Climate is fine, no need to save it and no means to do it either. Maybe it’s even getting cooler, the history of the sun-cycles may tell it. Enjoy life in the Global Green Airbag!

We have just ended a remarkably hot and dry summer. This is how weather works – it changes from day to day, from month to month and from year to year. There is nothing strange by this, just as it usually is, only this Summer was exceptionally hot and dry.

Let us look at the temperature for July 2018 (Fig. 1a). In Europe and West Asia, it was 1.5-2.0 °C warmer than normal (the average of the last 10 years). On a global scale, however, temperature was quite normal. All talk about “extreme heat” does not apply on a global scale, only on a regional sector of Europe and West Asia. Hence, the map shows regional variations in weather over the globe.

Now, let us compare the global temperature patterns for July 2018 and 2017 (Fig. 1b). What we see is similar map of regional variations in weather over the globe. But there are two remarkable facts:

Consequently, the fact is that July 2918 and 2017 rather are each others’ opposite in regional weather. Obviously, one cannot talk about “trends” in one or the other direction. The truth is quite different from the scenario of a general warming, which the climate lobbyists claim.

During the summer, this misuse of facts has been astonishing in Sweden. It is simple to understand why this has been the case: there it is the approaching general election, which make activists take on spreading of “fake news”.

The maps (Fig. 1) documents reality – it is the maps that apply: not the claims by climate lobbyists.

Author of more than 650 scientific papers and several books

President of Independent Committee on Geoethics 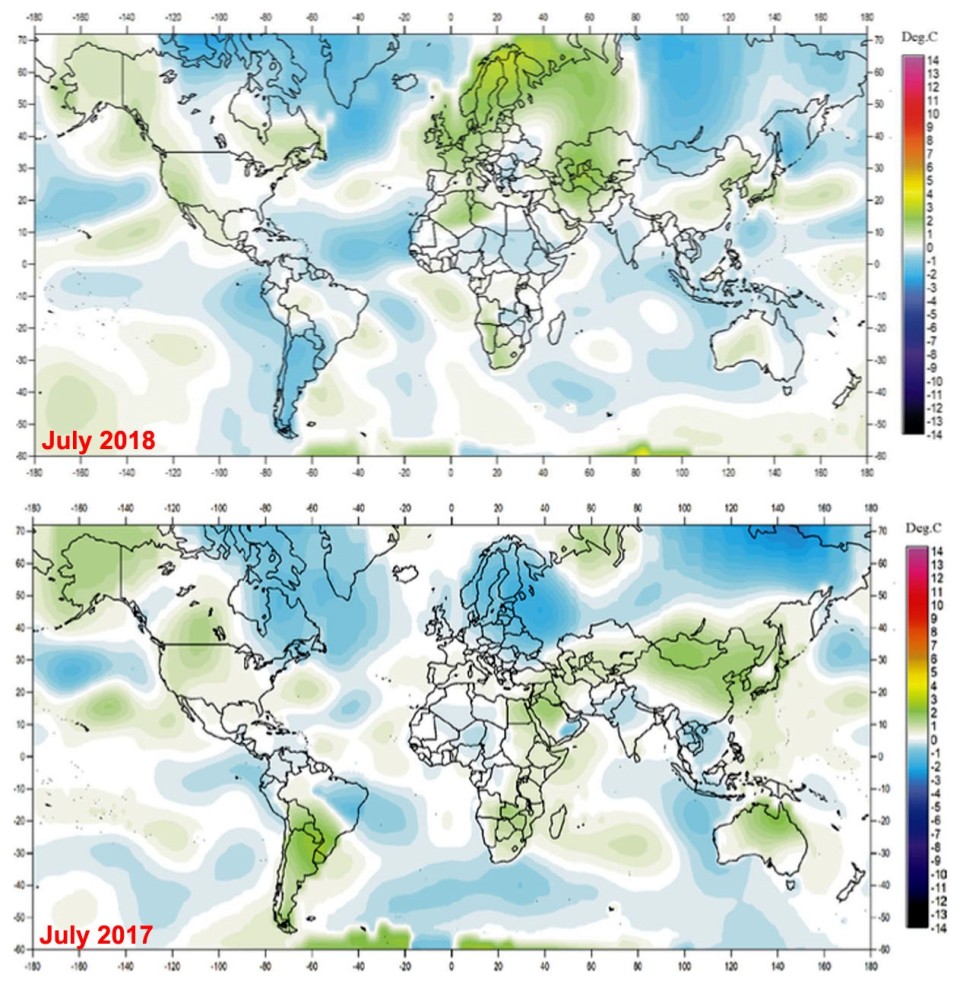